What is an airtight inflatable?

How are they different from cold air models?

Cold air inflatables only contain one single layer of material that is put together by sewing many patterns with one another.  Since cold air inflatables are sewn together using traditional sewing methods, the needles used to connect the patterns together create micro perforations where the thread weaves in an out of the material. This will cause air to escape, but that’s okay since all cold air inflatables require a continuous blower system that maintains the air pressure, as it’s leaking out. As odd and counterintuitive as that might seem, all cold air inflatables operate in this fashion. Whenever you’ve seen a huge inflatable at a car dealership, or one of those bounce houses, they’re almost always cold air models.

So, what makes an airtight inflatable?

Conversely, commercial grade airtight inflatables (commonly referred to as sealed inflatables) contain two layers of material, an outer cover and an inner bladder with a valve. The inner bladder is the key component in airtight inflatables. The inner layer cannot be sewn, since it cannot leak any air at all that would otherwise be caused by needle thread perforations. Instead, RF welding, or Radio Frequency welding, is used to literally heat and melt two pieces of material together. This technique will ensure that no air escapes when merging all the pieces of material. Hot air welding can be used for many intricate corners and details. The external layer, which is an outer cover that is often custom printed, is constructed to fit over the inner layer. The outer layer is produced through traditional sewing techniques, similar to cold air inflatable construction. The bladder is placed inside the outer cover carefully, to make sure each section coincides with its corresponding location on the outer shell once inflated. An external inflator is used to fill up the airtight unit, and then sealed off with a valve that is installed onto the inner bladder itself. Airtight inflatables are not usually large in size, and are more commonly found where electrical sources are scarce.

Why use an airtight inflatable?

How big or small can a sealed air inflatable be?

Sealed inflatables can be as small as a few feet and as large as 20’-30’ in length, height, or diameter, depending on the shape. Smaller sealed inflatables are more challenging to produce than the larger models. As such, each project is evaluated extensively before commencing production. Although the feasibility of each project varies, most are within the bounds of what’s normally possible. A large inflatable sealed rainbow can be much easier to produce than a small. 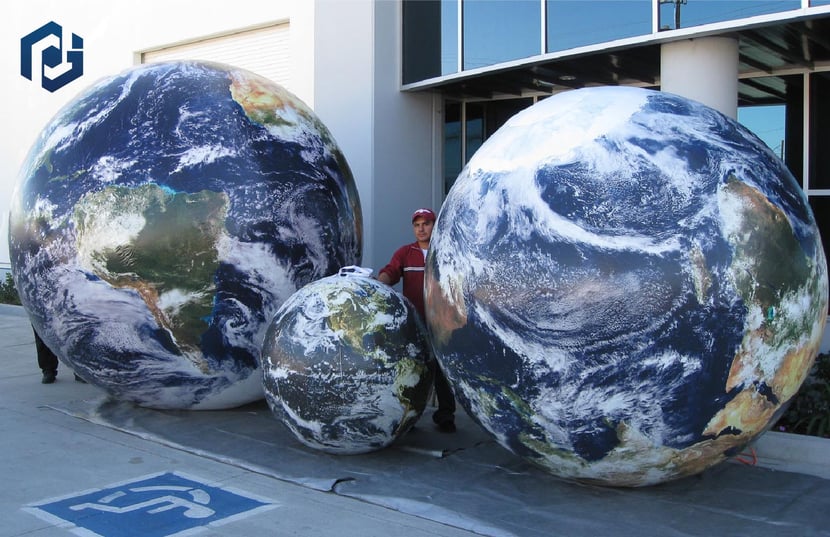 What kind of shapes can a sealed air inflatable be made into?

Airtight inflatables can be produced in a variety of shapes and sizes. Depending on the shape of the inflatable, the larger the size, the more detail it can have. Typically, the more complex the shape, the more difficult it is to produce. If a desired shape contains many branching points, like a tree, it may be more difficult to produce over a simpler shape, such as an egg. Most sealed inflatables tend to be more simple shapes like spheres, boxes, and tubes. Some of what’s been produced in the past include bottles, cans, globes, and custom box shapes. Regardless of complexity, most sealed units can be modified or printed to express more complicated structures or features. Since the outer shell of sealed units can be printed with any colors, details, or custom artwork that is desired, it can truly convey the message for what it is intended.

Of course! All of our sealed inflatable units can ship anywhere in the world. Since these inflatables are not usually huge in size, they can easily ship anywhere without much hassle. Most shipments go ground, but air freight is also available upon request. All inflatable units come with all the necessary set up accessories, so there’s no need to start looking up inflators. All our inflatable products are manufactured at our facility just outside Los Angeles, California.

How easy is it to set up an airtight inflatable?

Incredibly easy. Sealed inflatables can be set up in less than a few minutes. Simply plug in the provided inflator and use it to blow air into the valve. If the unit is on the larger side, unscrewing the valve will allow faster inflation, and once it’s almost full, replacing the valve will prevent air from escaping. The key is to inflate the unit until it’s firm. Over-inflation should be avoided since it could cause damage. All in all, the set up time for a typical sealed unit varies from 2-8 minutes. A faster set-up means more time for everything else in life.

How can I get one?

If you are in need of an airtight inflatable, just let us know. Let us know how you are going to use it an due will help you create it. They can be exhibited on the ground, hung from a ceiling or attached to the top of a roof. We have some in our inventory but should you need something outside of our catalog we can easily create it. Give us a call or shoot us an email and one of our friendly staff members will get back to you in no time.